Anxiety vs Depression | Here's What You Should Know About Them

Anxiety vs depression, what's the difference? These conditions have interesting similarities and differences, here's what you need to know about them... 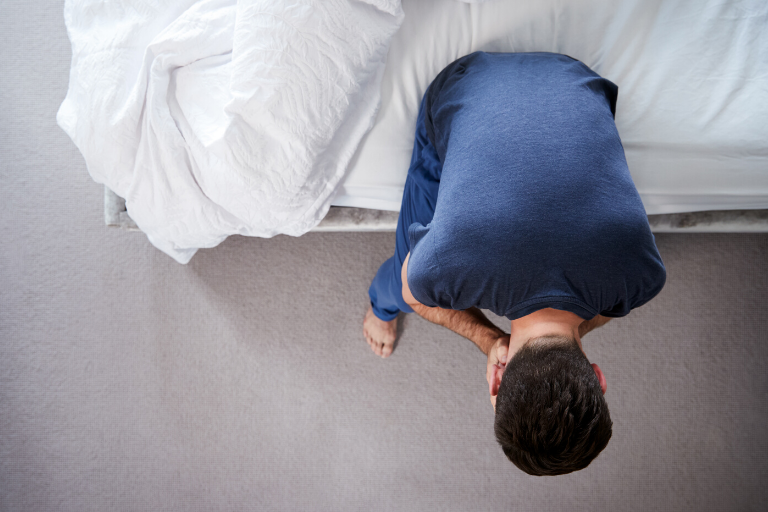 Understanding the differences between anxiety vs depression is important for self-analysis, and it can also enable us to help those in our communities who suffer from either condition.

The relationship between anxiety and depression can be a complex one to wrap one's head around. This is because while depression and anxiety are two different medical conditions, their symptoms, causes and treatments can often overlap.

Anxiety vs Depression - From a Biological Perspective

There are various neurotransmitters that are involved in anxiety. Some are inhibitory and some are excitatory, either playing a role in the upregulation or downregulation of anxiety disorders.

As an example to show the relationship between neurotransmitters and anxiety vs depression, let's look at the role of serotonin and dopamine in these conditions.

Serotonin in the brain is thought to regulate anxiety, happiness and mood. Thus, low levels of serotonin are associated with both anxiety and depression.

Regarding the neurotransmitter dopamine, research has shown that this chemical that is linked to pleasure and depression, may also trigger fear.

Thus, dopamine can also play a role in anxiety disorders. For example, there is evidence to suggest that people with social anxiety disorder symptoms may have an imbalance between the serotonin and dopamine transporters in the amygdala that are important for fear, motivation and social behaviour.

Anxiety disorders are characterized by a sense of doubt and vulnerability about future events.

Anxiety is characterised by persistent worry of fear. The worry might be about a specific situation, or it might be more generalised, where a person worries about many different things.

People with anxiety may worry about the immediate and long term future. Some people may also spend a significant amount of time thinking and worrying about the danger of death, as well as anticipated dangerous outcomes.

Depression is a serious clinical disorder that is associated with disturbances in mood, loss of interest or pleasure in previously enjoyed activities, and profound feelings of sadness and hopelessness.

People with depression may experience changes in their sleep patterns, sexual interest and activity, appetite and weight, and the ability to concentrate.

Depression may also cause a person to persistently think about death, in the sense that they may not consider life to be worth living. People with depression may consider themselves to be a burden on others, and may struggle with thoughts of self-harm or suicide.

Situations like losing a loved, getting fired from a job, or going through a divorce are difficult situations that can lead to a person feeling sad and lonely. However, for people who are diagnosed with clinical depression, manifestations of low mood are more severe and persist for a longer period of time.

Differences Between Anxiety and Depression

While anxiety and depression have similar biological roots, these two conditions are experienced differently.

There are also different types of depression-related disorders such as major depressive disorder and seasonal depression.

There are distinguishing features between anxiety and depression. Anxiety is linked with a fear of the future, while those who are depressed are less likely to experience intense fear in that regard, since they view both the present and future with little hope.

People with depression move slowly, may have less energy, or just generally seem duller. They may also seem sad or tearful, and talk about feeling guilty, empty or worthless. Depression may result in loss of focus and memory, as well as sleeping much more or much less than is typical because of low energy.

However, people with anxiety may seem more restless and agitated, due to excessive worrying that disrupts daily functioning. Anxiety is often linked with the characteristics of heightened arousal, such as muscle tension, increased heart rate, blood pressure and sweating.

With regards to medication, many different types of medication are used in the treatment of anxiety disorders including traditional anti-anxiety drugs such as benzodiazepines which are typically prescribed for short-term use, and newer options like SSRI antidepressants, which we'll talk more about later.

While benzodiazepines are commonly used for anxiety, evidence from the FDA shows that benzodiazepines can worsen cases of pre-existing depression, and other studies show that they may potentially lead to treatment-resistant depression. So that's another difference in anxiety vs depression when it comes to treatment.

Similarities Between Anxiety and Depression

Although the underlying characteristics of anxiety and depression are different, they do share some similar signs and symptoms.

Changes to sleep patterns, irritability, loss of appetite, fatigue and difficulty concentrating can be symptoms of both anxiety and depression.

Many people with depression may experience something called 'anxious distress' which involves feeling tense and restless, experiencing difficulty concentrating because of a fear that something awful will happen, and a feeling that one will lose control.

There are also similarities in the medications used for each condition.  Selective Serotonin Uptake Inhibitors (SSRIs) are a class of drugs that are typically used as antidepressants in the treatment of major depressive disorder and anxiety disorders. SSRIs treat depression by blocking the reabsorption of serotonin intro neurons, thereby increasing levels of serotonin in the brain.

Serotonin-Norepinephrine Reuptake Inhibitors (SNRIs) are another class of antidepressant drugs used to treat major depressive disorder and anxiety disorders. SNRIs increase levels of serotonin and norepinephrine in the brain by blocking or delaying their reuptake by nerves.

Can You Have Anxiety and Depression at the Same Time?

Yes, it's possible for people to experience depression and anxiety at the same time.

Actually, it's quite common - around half of people with generalized anxiety disorder will also have depression.

We see this happen when those who are having a difficult time with an anxiety disorder start to feel depressed as a result of the way anxiety is interfering with their life.

As therapist Sally Connolly, LCSW puts it, "When you get anxious, you tend to have this pervasive thinking about some worry or some problem and you feel bad about it. Then you feel like you've failed, and you move to depression."

Researchers have found that when anxiety and depression occur together, resolving anxiety quickly should be the first goal of treatment. Once this objective is accomplished, patients are much more likely to remain compliant with their antidepressant regimen and complete therapy.

Mixed anxiety-depressive disorder (MADD) is a separate diagnostic category used to refer to patients who manifest both anxiety and depression symptoms, yet not intensely enough to meet the full criteria for either a specific anxiety or depressive disorder. However, this combination can still cause serious distress and affect a person's daily functioning.

If either anxiety or depression impacts your life, you should seek help from a medical professional. The good news is that whether you suffer from anxiety, depression, or both, you can get treatment to help you overcome your distress.

Cognitive-Behavioural Therapy (CBT) is a common treatment approach for anxiety and depression, which can help people learn how to work with unhelpful thought traps.

You can download our free guide on 3 Ways to Stop Anxiety and Panic Attacks, which is based on some powerful principles from Cognitive-Behavioural Therapy.

Thanks for reading. Did you learn anything interesting about anxiety vs depression?