The Tort of Negligence

What elements are involved in the tort of negligence? Let's learn about negligence and how it is handled in law. 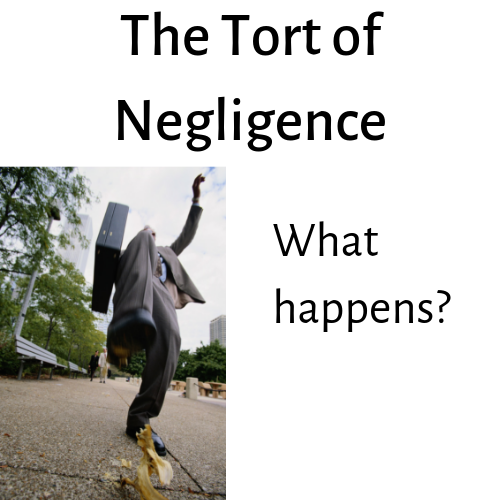 Before we learn about the tort of negligence, let's first understand what a tort is. Basically, torts exist to compensate for harm arising from human interactions. According to Wikipedia, a tort is a civil wrong that causes someone to suffer loss or harm, resulting in legal liability for the person who commits the wrong.

The tort of negligence arises from the combination of two things:

4 Elements in the Tort of Negligence

There are four main elements we examine in the tort of negligence:

These elements are pursued sequentially.

Test 1- Relationship between the parties

Negligence cases are based on a non-contractual relationship between the parties. Do the parties have a relationship that establishes a duty of care, such as a surgeon with a patient, or two drivers driving alongside each other on the road?

The Neighbour Principle for Forseeability is based on the concept that a person must take reasonable care to avoid acts or omissions which can be reasonably foreseen as being likely to injure ones neighbour. This test asks the question: Could I forsee this action as harming those to whom I have a duty of care?

The Reasonable person test is situation specific and considers what would be expected of an ordinary, reasonable and prudent person in the same circumstances.

Specialists have a higher standard of care. If a person has received a considerable amount of training, you would have higher expectations of their ability to control the situation.

This aspect of the tort of negligence asks the question: Did the defendant's action cause the harm?

But-for-test: Erase the actor. Could there be no accident? The key test for causation is known as the 'but for' test, which basically asks whether the loss would have been sustained 'but for' the defendant's negligence.

The but-for-test essentially looks for multiple causation. Are there other people involved? Did they contribute to negligence? We'll talk more about this below...

The fourth element in the tort of negligence is remoteness of damage. Remoteness acts to limit liability.

Would the defendant's negligence cause these types of damages?

When a court asks whether a harm was too 'remote', what is essentially being asked is whether the consequences of the negligent action were so far removed from it as to have been unforeseeable by the defendant.

Essentially, how far is the harm in a chain of events?

Example: If Mike swung a golf ball that hit Darlene in the head, that caused her to hit Joe and make him spill his bucket of water on the floor, that caused Lucy to slip and elbow Joanne, that caused Joanne's cat to jump on Erica who is terribly allergic to cats, and she proceeds to faint...could the harm caused to Erica be too remote to blame Mike? Probably.

Thin Skull Rule - A wrongdoer must take his victim as he finds him. The unexpected frailty of the injured person (say a person with a hemophilia who may bleed excessively after injury) is not a valid defense to the seriousness of any injury caused to them. The thin skull rule applies after we determine that an injury is not too remote.

We've considered the four elements of the tort of negligence, now let's consider some defences that the defendant could claim:

Volenti non fit injuria (Latin): "To a willing person, injury is not done."

Volenti non fit injuria is a voluntary assumption of risk. It is a common law doctrine which states that if someone willingly places themeselves in a position where harm might result, they have no claim to negligence on someone else's part.

Doing the activity itself is risky, and the plaintiff "consents" to the risk inherent in the event.

This is a full defence to the tort of negligence.

A user signs release forms, or by purchase/sign in of a good/service/ticket. For example, a waiver than you might sign at a trampoline park, formula 1 racing, bungee jumping, etc.

Those are the elements and defences related to the Tort of Negligence in Canada.

Read about the differences between torts (like the tort of negligence) and contracts here.