Let's look at the topic of internet and social media addiction and how a person's life satisfaction impacts their risk of developing such addictions. The focus is on the interesting findings of three journal articles that study the link between a person's real life and virtual life. 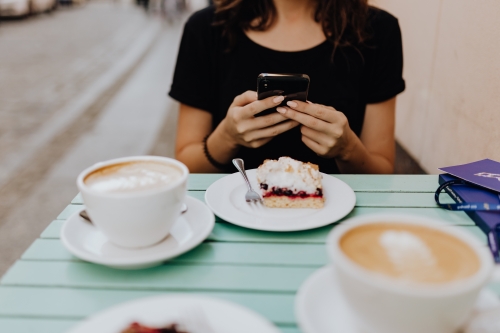 Consumers today are more reliant on technology than ever before. People spend hours each day using the internet, simply switching from one device to another depending on what they need. Thus, internet and social media addiction becomes an increasingly relevant topic, with the field of academia earnestly trying to mitigate the possible negative consequences of this generation’s tremendous internet dependency.

Emotional states play a signification role in affecting addiction behaviours (p. 73). An individual’s feelings of happiness and stress can impact whether on or they will become heavily addicted to the internet and social media.  Individuals who have had to deal with troublesome life situations without adequate support experience a lower life satisfaction, and are more likely to develop intense internet and social media addictions (p. 73). Longstreet & Brooks consider the effect of life satisfaction both in terms of generalized internet addiction and social media addiction.

Access to the internet has become more prevalent than ever before. People are able to access the internet out of the house, on mobile devices. They are able to connect via Wi-Fi and mobile data, in ways that were unheard of for previous generations. As of April 2017, it was estimated that approximately 2.4 billion people in the top 50 countries of smartphone usage have access to this technology (p. 73). Longstreet & Brooks even comment that electronic devices “practically run the world” (p.73), and this is a statement that most people would likely agree with.

An advantage of electronic devices that are connected to the internet is that we are able to easily send information to others at high speeds (p. 73). There are various web applications that we use each day as they allow us to quickly communicate with our loved ones, collaborate on projects with those who live far away (even on the other side of the world), and make purchases without ever having to enter a physical store. The internet has its advantages, but as expected with all other forms of technology, there are still associated threats.

Longstreet & Brooks refer to the main issue as the debilitating drive to continue internet usage. “Users feel that they are unable to accomplish regular activities due to their inability to disconnect from the internet” and this strong impulse is known as pathological internet use or internet addiction (p. 73).

Internet addiction is dangerous because users start to “depend on the internet for their psychological wellbeing”, experiencing unpleasant emotions when deprived of such technology (p. 74). Social media results in similar withdrawal symptoms as users become accustomed to checking for status updates, friend requests and other notifications (p. 74). Social media makes users feel a deep connection to their online “friends”, and it triggers a desire to be constantly connected.

Through face-to-face and online sessions, these hypotheses were found to be true. The research showed that many individuals are ignorant to the dangers of internet addiction; and that life satisfaction is inversely related with both internet and social media addiction. This means that as a user of internet technology “finds things to be happy about in their life, their life satisfaction will increase and their corresponding levels of addiction (social media and internet) will both decrease” (p. 75).

The second article, by Ofir Turel, Damien Brevers and Antoine Bechara looks at the aspect of time distortion in relation to social media addiction. The purpose of their research was to examine the way those at risk for social media addiction handle non-social media tasks, and how their sense of time is affected during the completion of those tasks (Turel, Brevers, & Bechara, 2018, p. 84).

Social media addictions are said to have adverse consequences just like other technology addictions such as internet gaming disorder (p. 84). Using the term addiction is not far-fetched, excessive social media usage results in similar symptoms to other more accepted forms of addiction.

In the second article, the researchers took a sample of 274 Facebook users from within a university campus (p. 85). Participants in the study were asked to complete a survey on their Facebook use, this occurred in a computer lab where time elements like clocks were removed (p. 85). This task was important for helping participants self-reflect; it also served to trigger a desire to use Facebook in those who are at-risk for social media addiction (p. 86).

Like the first article, the third article attempts to pinpoint factors that may lead to internet addiction. In a similar vein to Longstreet & Brook’s paper, Tikhonov and Bogoslovskii set the stage by referring to the prevalence of internet technology. As Tikhonov and Bogoslovskii (2015) put it, “the importance of information exchange in the modern world is clear” (p. 96).

Compared to the previous two articles, theirs’ takes a more generalized approach on the topic of internet addictions. Moreover, the topic of social media addiction does not feature as prominently in this article as in the previous two, and this likely has to do with the fact that this article is the oldest of the three. Between the beginning of 2015 and now, we have seen social media blow up and play a bigger role in people’s lives. The social media landscape has radically evolved – for example, Instagram has grown immensely and people now think of networks other than Facebook when they think of social media.

One of the strengths of the third article is that it provides an easily understandable and concise definition of internet addiction. Internet addiction is characterized as a “person’s obsessive desire to access the Internet while being offline, and the inability to get offline while one is online” (p. 97). Such addiction also involves a detachment from reality while one is focused intensely on a narrow area of activity, namely, internet use (p. 97). This article harmonizes with the previous article by Turel et. al, as it further points to the neglecting of  responsibilities as a symptom of internet addiction (p. 97). This article also repeatedly uses the term “computer addiction” which may seem a bit archaic to readers today, as we have become accustomed to accessing the internet across multiple devices - our smartphones are generally more heavily used than our computers for connecting to the internet.

The third article states that the “entire spectrum of modern theories” that contemplate internet addiction “is practically reduced to understanding the relationship between reality and virtuality” (p. 99). This forms a connection to Longstreet & Brook’s article about life satisfaction and internet addiction, because that article essentially claims that an individual’s quality of life in the “real world”, translates in their experience of the “virtual world”. This is an interesting observation, because it helps us understand how individuals become so caught up in technology usage and potentially internet addiction. A positive experience of reality where a person values their physical interpersonal relationships is predicted to result in a lower risk of developing internet addictions.

In contrast, the article about time distortion focuses on an element that can easily be measured – people’s estimates of how long tasks will take. This article therefore appears to be more experimental and empirical than the other two articles, especially the third article which doesn’t feature any methods and statistical analyses. The second article also focuses primarily on an experiment involving Facebook users. It would be interesting to examine the behaviours of users of other social networking sites and see how the results correlate. Does time distortion affect users of Facebook in the same way that it does Instagram, or Snapchat users?

The article on time distortion offers future research possibilities like testing the relative efficacy of other tasks such as “asking people about social media friends and activities while avoiding social media use” (Turel et. al, 2015, p. 87). This would certainly be an interesting experiment. The research this paper presented was based on time distortion while participants answered questions about Facebook use, but if they were asked about their friends on social media, it might trigger a stronger impulse to use social media and distort their time estimates even further.

This relates again to the relationship between reality and virtuality presented in the last article by Tikhonov and Bogoslovskii. There is an undeniable connection between a person’s quality of life and their dependency on a virtual life offered by social media and the internet at large.

The first and second articles both rested on the premise that young people are most likely to develop internet addiction, and so this group was chosen for both experiments. Longstreet’s article stated that undergraduate students were deemed applicable for the study since “they appear to be the most vulnerable to developing a dependence on the internet” (Longstreet & Brooks, 2017, p. 74).

Turel et. al similarly commented that “the recruitment strategy was based on the idea that university students can be heavy users of social media and present varying degrees of addiction-like symptoms” (Turel et. al, 2018, p. 85). This view follows a generally acknowledged idea that millennials and Generation X deal with major social media addiction, particularly since they were born in the internet age. However, it would be fascinating to see more research on how social media addiction affects other age and demographic groups, and to see a paper that takes a more unique stance on this.

Overall, all three articles offer complementary perspectives on the topic of internet and social media addiction. It is evident that life satisfaction plays a significant role in whether or not an individual will develop social media addiction or not. This is because as Tikhonov and Bogoslovskii put it, “the path of the addictive outlet is gradually transformed from a means into a goal, it becomes a meaning of life which traps a person in a permanent escape from reality” (Tikhonov and Bogoslovskii, 2015, p. 99).

When a person struggles to find life satisfaction, they look for this online. What started off as a means of dealing with life’s stresses turns into a goal in itself – a way to live a separate, more interesting life. The relationship with time distortion fits into this picture as well, because the craving to be online results in a feeling of boredom for real life tasks, and a sense that such tasks take up more time than they actually do.

Without a doubt, then, those seeking freedom from internet addictions must actively seek to improve the quality of their everyday lives. Looking into the future, though, we expect that internet and social media addiction will continue to be a topic that attracts the interest of academic researchers. This is because, frankly, while a percentage of such addictions will be thoughtfully mitigated by some individuals, most current addictions will likely only become more deep-rooted over time.