When managing groups and teams, it's important to be aware of a few factors that influence group cohesiveness. Let's talk about how groups develop, group norms and other factors that play a role when people work in teams. 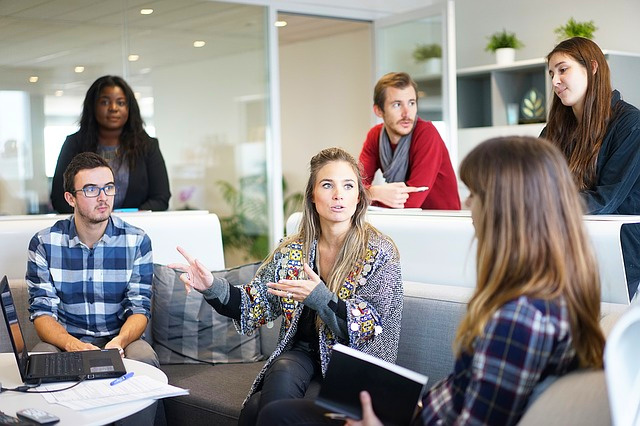 Every group moves through stages of development. Though development happens at first rates, we tend to see a progression from when members work independently to when they begin working more interdependently, as a whole.

There is opportunity for each member of the team to benefit from group work - a team setting can help members develop new skills from working collaboratively.

According to the book Essential of Contemporary Management, there are five stages in group development: forming, storming, norming, performing, and adjourning.

Forming is when members try to get to know each other and reach a common understanding of what they are trying to accomplish as a group. The goal here is to make each member feel like he/she belongs and has something to contribute.

Storming is the following stage of group development where we see conflict and power struggles. Group members experience disagreements because some members are unwilling to submit to the opinions of others. The issue usually is in determining who should lead the group, but at the end of this stage a relatively clear hierachy of leadership emerges.

Norming is when interpersonal conflicts are resolved and close ties between group members develop. The team becomes more cohesive and feelings of friendship and camaraderie emerge, as well as a sense of group identity. Acceptable standards of behaviour called group norms start to develop, and these influence members' behaviour. Group norms are so influential that they often minimise the need of external control from managers. However, managers need to pay attention to the norms that develop in the group to ensure that such norms are conducive to high-performance.

Performing is the stage where the real work of the group gets accomplished. At this stage, management seeks to ensure that members are motivated and that teams are given enough responsibility and autonomy.

Adjourning is a stage that applies to groups that are eventually disbanded. During adjourning, a group that only came together temporarily (for the completion of a specific task) is dispersed. For permanent teams, performing is the last stage in their development.

So those are the stages in group development, now let's talk more about group norms and cohesiveness...

As we said before, group norms are shared standards for behaviour that most group members follow. Groups develop norms for a wide variety of behaviours, including working hours, the sharing of information, how certain group tasks should be performed and even how members of a group should dress.

Managers seek to promote group norms that result in high-performance and the attainment of group goals, norms such as those that value good communication and accountability.

There are three reasons why group members typically conform to norms:

However, deviance is the opposite of conformity, and it is when a member of the group violates a group norm. Groups generally respond to members who behave defiantly in one of three ways:

Managing groups and teams in an effective way requires that groups have the right balance of conformity and deviance. A group needs a certain level of conformity to ensure that it can control members' behaviour and channel it in the direction of high performance.

However, managers can also take several steps to ensure that there is enough tolerance of deviance in groups. Why? It may be necessary for group members to deviate from dysfunctional norms. Moreover, when deviance occurs, group members should be willing to reflect on the appropriateness of the violated norm and change the norm if necessary. Discretion is needed, but flexibility opens to the way to changes if required.

Finally, let's talk about how we get cohesive teams...

There are four main factors that contribute to group cohesiveness:

Group size - To promote cohesiveness in groups, managers should try to forms groups that are small to medium in size.

Effectively managed diversity - Diverse groups often come up with more innovative and creative ideas. In forming groups and teams, managers need to make sure that a diversity in knowledge, experience and expertise is reflected in each group.

Success - Who doesn't like being on a winning team? As groups become more successful, they become increasingly attractive to their members, and their cohesiveness tends to increase. When cohesiveness is low, managers can increase cohesiveness by making sure that a group can achieve some noticeable and visible successes.

Overall, group cohesiveness increases members' participation and motivates group members to accomplish both group and organizational goals. This is necessary for an organization to be effective and gain a competitive advantage.

So those are important things to know when managing groups and teams! Group work can be very rewarding, so it's important to understand how groups work best so we can make the most of team opportunities.