Let's look at important social anxiety disorder symptoms to help you identify the condition and understand what goes on mentally and physically. 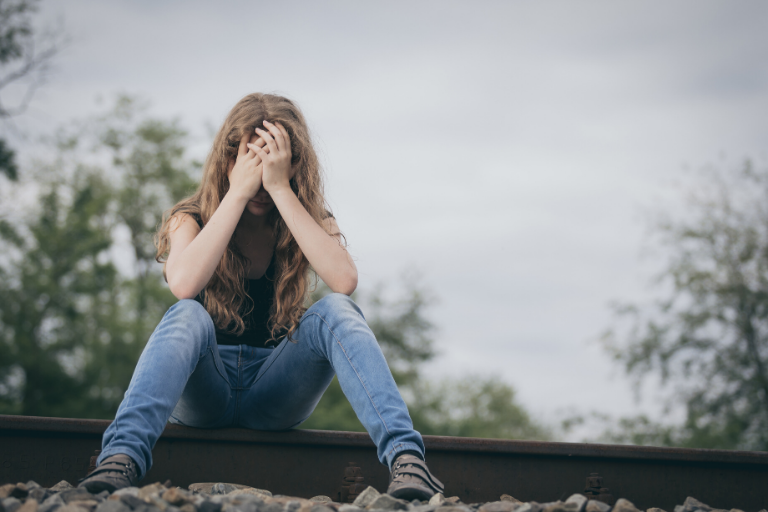 Social anxiety disorder, also known as social phobia, is a condition where a person has an intense fear of situations that involve interactions with others.

The American Psychiatric Association describes social anxiety disorder symptoms as including a “marked and persistent fear” of social situations in which the individual fears acting in a way that will be humiliating or embarrassing. This condition is more than just shyness, which we all may experience from time to time.

Social anxiety often arises as a result of an individual’s perception of the social world as a dangerous one which they have little ability to navigate.

People who suffer from social anxiety find it to be a major impediment to their everyday functioning. Below are some key signs of social anxiety disorder including key problems areas, physical symptoms, and other important things to know.

Extreme Fear of Being Watched or Judged By Others

One key social anxiety disorder symptom is being nervous about being watched by others. Those with this condition desperately want to avoid situations that put them in the spotlight. Being the focus of attention is not okay with those who suffer from social anxiety disorder, and it is extremely unnerving for them to catch someone staring at them.

One of the most troubling aspects of social anxiety is being aware of your condition, and being so worried that others will notice. Social anxiety disorder makes you very self-conscious and you become more uncomfortable as you imagine what you might look like to others.

The fear of having to interact with a stranger is one of the most terrifying potential situations for a person with social anxiety. Associating with a group of people you are familiar with is already a daunting experience – so having to be surrounded by total strangers is perceived as a terrible fate.

Fear of interacting with strangers stems from worries about the unknown – how does this person view the world? How will they perceive me? What if I say something that clashes with their beliefs? And most often the looming question of: What will I even talk to them about?

Fear of Embarrassment in Social Situations

Social anxiety disorder makes a person over-analyze their actions and how such actions may be perceived by others. Those with social anxiety avoid crowds and stay away from doing anything that could be socially frowned upon.

Those who suffer with social anxiety disorder have a fear of social events even before they happen. Anticipatory anxiety could arise when a personal with social anxiety recalls previous negative experiences. Just the thought of the upcoming situation could cause a person to worry for weeks.

An invitation to a party could trigger social anxiety disorder symptoms. Anxiety about upcoming events is linked to a broad range of factors: fear of offending the host, worry about how exactly to turn down the invitation, fear of people noticing patterns in behaviour, etc. 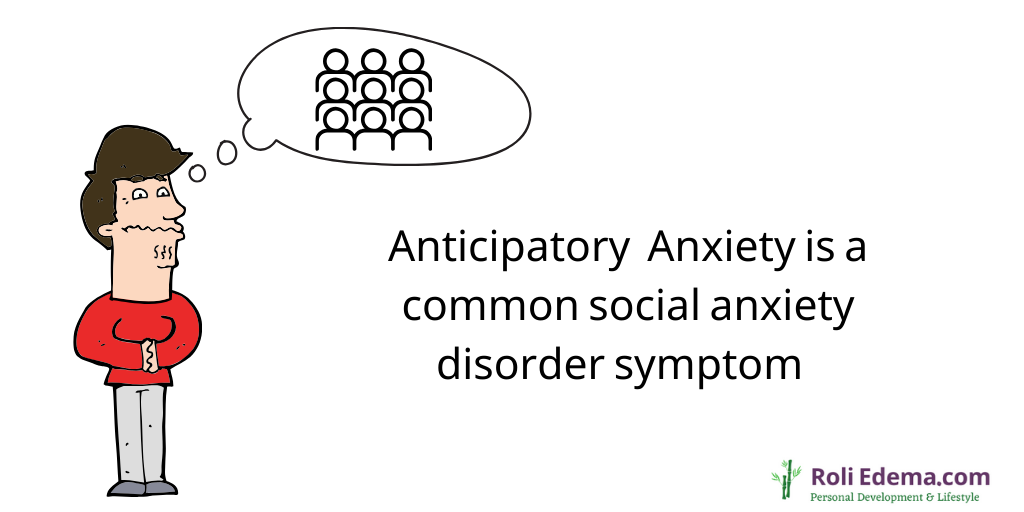 Rumination is focused attention on the symptoms of one’s distress. What this means is that a person with social anxiety experiences extreme discomfort at the thought of the analysis that comes after a conversation. Such analysis involves worrying about if they said the right thing, if they said something that sounded stupid or offensive, and worry about disapproval.

These kinds of thoughts are so immense that they completely deter an individual from being involved in a social interaction in the first place.

Fear of Being Stuck

Another symptom of social anxiety disorder is the fear of being stuck or trapped in an awkward social situation. The idea of being anxious during an interaction and not being able to find a way out of it could be quite debilitating.

Those with social anxiety disorder want to avoid situations where they might have to endure a long painful discussion, or silence – because conversations can be a struggle.

Another worry is the thought of going blank, or completely forgetting what you were trying to say, especially in a circumstance that involves speaking in front of a group of people.

Another dimension to the fear of looking anxious that we mentioned before is anxiety about physical symptoms. There are tell-tale signs of social anxiety that add to a feeling of embarrassment. What are they?

Below are some physical signs of social anxiety. Of course, the symptoms experienced may differ from person to person.

As well as the symptoms that are quite obvious, a person with social anxiety disorder may experience heart palpitations, stomach upset, nausea, dizziness or light-headedness, a dry mouth and throat, and muscle tension.

Social anxiety disorder can result in great stress and extreme pressure on an individual, especially when they see no way of removing themselves from, or avoiding the situation.

Imagine a conversation where a person is already becoming anxious – then the physical symptoms start to appear. Now, the discomfort has reached another level, perhaps where the sufferer cannot help but display their fear and embarrassment.

Some of these symptoms may present themselves during an interaction, such as avoiding eye contact, a shaky voice, blushing etc., but some symptoms may appear and persist after the interaction.

Social anxiety disorder can also cause walk disturbance, where an individual loses balance or stumbles when navigating around a group of people. Those with social anxiety may feel like the world is quickly spinning in front of them, and this manifests in a state of confusion which could easily bring one to tears.

For children, anxiety about interaction with adults or their peers could result in them having temper tantrums, clinging to their parents, or simply refusing to speak.

Adults who exhibit social anxiety disorder symptoms may also experience an extreme dread of speaking with someone in authority. Such fear may be based on an overwhelming feeling of inferiority or the dread of disapproval.

A person may also want to avoid being in a social setting even with someone they admire, for fear that they might do something embarrassing and be judged by their actions.

Related Post: Anxiety Statistics - What Do The Numbers Show?

What Situations are Particularly Difficult for those with Social Anxiety Disorder?

Everyday interactions that most take for granted can be a real struggle for those with social anxiety disorder. As we mentioned earlier, social anxiety can cause a fear of being introduced to new people.

Other nerve-wracking situations may include ordering food at a restaurant and eating in front of people, using a public restroom, walking in late, or walking into a room where people are already settled.

Let’s illustrate how these fears might play out. Suppose a person with social anxiety has just found out that a friend is getting married soon. They may start worrying about receiving and having to reply to an invitation, having to attend a wedding and being in a room full of strangers.

As they picture the wedding, they imagine been approached by someone who wants to have a friendly conversation, being stuck in that conversation, and showing physical anxiety symptoms. Or they might imagine the terrible awkwardness of being asked to dance at the wedding, of not fitting in, or of doing something embarrassing.

They may even be worried that their friend might mention their name in a speech, and then all of a sudden – the whole room is watching.

See how it could play out? For someone with social anxiety disorder, a whole range of feelings and emotions could be triggered at the thought of a social interaction.

Another thing to note: Social anxiety sometimes causes individuals to underachieve at school or work to avoid being put in the spotlight, being promoted, or having to participate in group tasks.

Are Social Anxiety Disorder Symptoms Present All the Time?

People experience social anxiety in different ways. It is not uncommon for people to fear some social situations and feel quite comfortable in others. According to the National Institute of Mental Health, some people with the disorder do not have anxiety in social situations but have performance anxiety instead.

For example, they might feel comfortable spending time with family and friends, and socializing with workmates. Yet they might feel physical symptoms of anxiety during situations like giving a speech, performing on stage, or playing a sports game.

Also, some people fear only a specific situation, while others avoid a wide range of social situations.

As well as affecting personal relationships, social anxiety disorder can lead to:

Social anxiety disorder can be linked with other mental health disorders, and result in problems with substance abuse, such as overdrinking of alcohol.

They then turn their attention inward and use their self-perception as a feedback of their own performance, which is often to their discredit.

Those with social anxiety disorder symptoms use these internal experiences to provide confirmation of their social ineffectiveness, which is believed to be obvious to everyone around them.

People with social anxiety disorder often imagine themselves as others see them, in a manner that is often distorted. 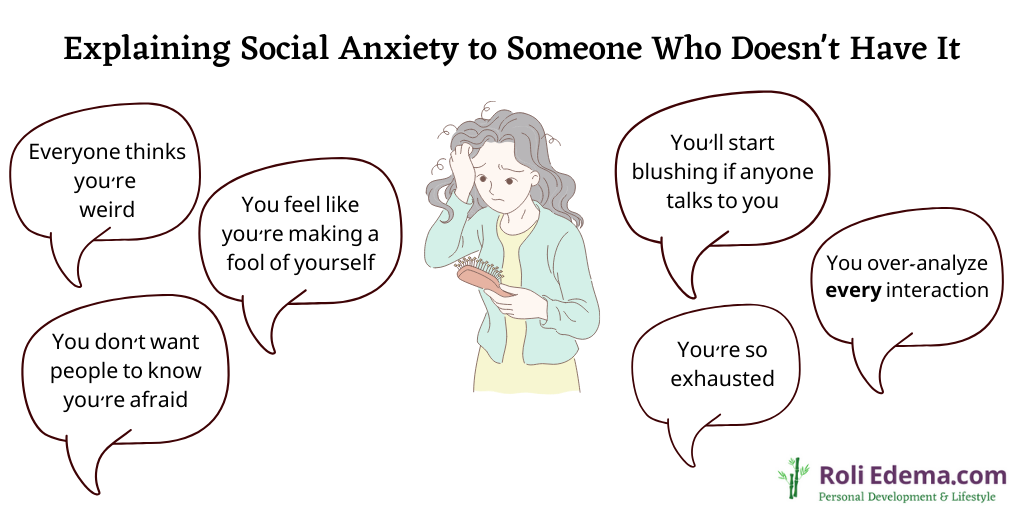 Social Anxiety and Defenses against the Outside World

Socially anxious individuals also engage in certain behaviours to try and prevent negative evaluation by others. For example, a person who is worried that others will notice his excessive sweating may wear an extra layer of dark clothing.

Researchers have described such behaviours as ‘safety behaviours’. It has been founded that such safety behaviours do not really solve the problem, because a person may feel as though they only escaped embarrassment through taking such a precaution.

Really though, no-one might have noticed them sweating anyway, but because the person with social anxiety disorder continues to put this guard up, they may never realize this fact.

Social anxiety disorder also causes individuals to overestimate how negatively others evaluate their performance. In addition, they may predict the consequences of social failures to be far worse than is realistic.

As a result of these cognitive distortions, people with social anxiety are hypervigilant in monitoring their behaviour, but this ends up further limiting their ability to engage in and enjoy social interactions.

Sadly, some may interpret a difficulty in social settings as a sign of the individual being aloof or unfriendly, which is often not the case.

College students are routinely faced with potential anxiety-provoking situations such as living with roommates, college social events and group projects.

Interestingly, the students who reported feelings of social anxiety said that they themselves were more likely to perceive others who show signs of anxiety as having less strength of character and as less attractive.

Essentially, what the study showed is that socially anxious college students also judge others who appear anxious more negatively than do students without social anxiety.

If you struggle with anxiety, or relate to the symptoms mentioned above, download our free guide on 3 Ways to Stop Anxiety and Panic Attacks here.