10 Best Biography Audiobooks of All Time - Memoirs and More (& Free)

It’s an amazing thing to hear a person’s life story, read aloud. Here are the best biography audiobooks to give you a peek into different iconic perspectives. 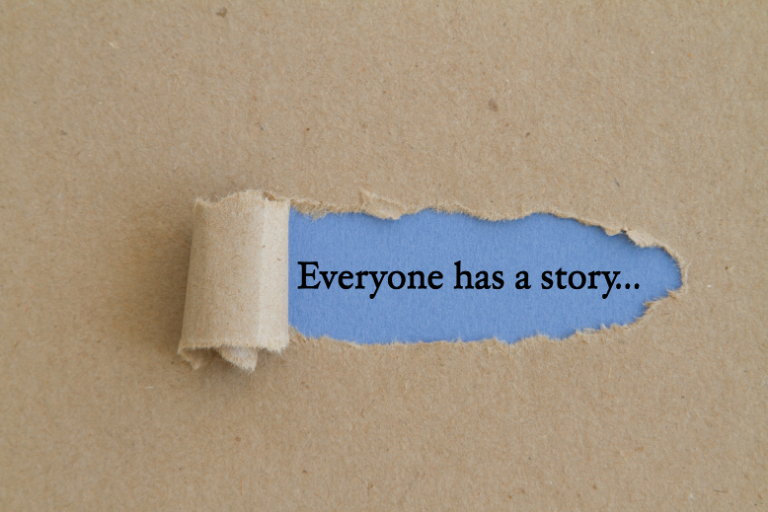 There’s something special about biographies.

Something that makes them so different from any other type of literature or narrative.

In fact, Benjamin Disraeli, former Prime Minister of the UK once said:

“Read no history; nothing but biography, for that is life without theory.”

Biographies often paint a rare, remarkable, and raw portrait of a person’s life, with brushstrokes that are unique to the author.

Below, I’ve put together a list of the best biography audiobooks to listen to in your spare time.

They’re all crafted with an incredible amount of research and presented in an engaging way; some of them are even read by the authors themselves.

These biography audiobooks will hopefully expand your world and give you a behind-the-scenes glimpse of the lives of various well-known figures - both past and present.

What are the Best Biography Audiobooks?

Here are 10 of the best biography audiobooks, including autobiographies, memoirs, and intriguing third-party accounts:

1. Elon Musk: Tesla, SpaceX, and the Quest for a Fantastic Future 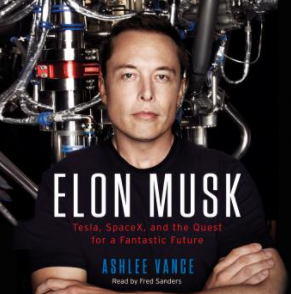 This biography gives us an illuminating and authorized look into his life as one of Silicon Valley’s most ambitious entrepreneurs and the renowned innovator behind SpaceX, Tesla, and PayPal.

Biographer Ashlee Vance captures the full spectrum of Musk’s life and work, from his tumultuous upbringing in South Africa and flight to the United States, to his iconic technical innovations and entrepreneurial pursuits.

He argues that Musk is a contemporary combination of legendary inventors and industrialists including Thomas Edison, Henry Ford, and Steve Jobs, and questions what we can expect in the future...

=> Listen to the Elon Musk biography: get the free audiobook here. 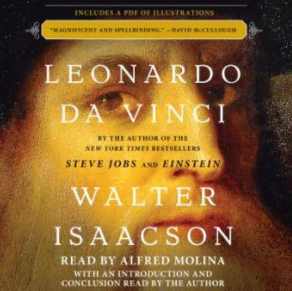 This biography audiobook tells the story of a man who is widely considered one of the most diversely talented individuals ever to have lived - Leonardo da Vinci.

Based on new discoveries and thousands of pages from Leonardo da Vinci’s astonishing notebooks, Walter Isaacson brings the genius to life in a narrative that connects his art to his science.

We learn about a man who not only produced the two most famous paintings in history - The Last Supper and the Mona Lisa - but someone who also pursued innovative studies of anatomy, fossils, birds, the heart, flying machines, botany, geology, and optics.

Overall, this audiobook is both a study in creativity and a reminder to be passionately curious, carefully observant, and - like talented rebels in any era - to think differently.

=> Listen to Leonardo Da Vinci : get the free audiobook here. 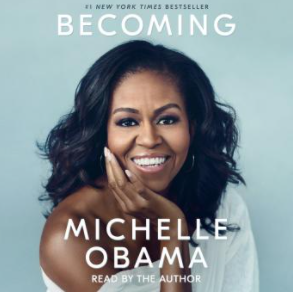 This #1 New York Times bestseller is an intimate and inspiring memoir by former First Lady of the United States, Michelle Obama.

This autobiography audiobook is narrated by Mrs. Obama herself and invites readers into her world, chronicling the experiences that have shaped her.

We follow her journey, from her childhood on the South Side of Chicago, to her years as an executive balancing the demands of motherhood and work, to her time spent at the world’s most famous address.

With honesty and lively wit, she describes the triumphs and disappointments, both public and private, that ultimately lead to her establishing herself as a powerful advocate for women and girls in the U.S. and around the world.

=> Listen to Becoming : get the free audiobook here.

4. Anne Frank: The Diary of a Young Girl: The Definitive Edition 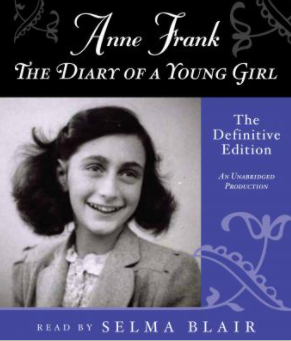 Discovered in the attic in which she spent the last years of her life, Anne Frank’s remarkable diary has since become an irreplaceable masterpiece and an eloquent testament to human bravery.

For two years during the Nazi occupation of Holland, a thirteen-year-old Jewish girl and her family fled their home and went into hiding in the “Secret Annex” of an old office building.

Cut off from the outside world, Anne’s family faced hunger, boredom, the constant cruelties of living in confined quarters, and the ever-present threat of discovery and death by the Gestapo.

This narration of Anne Frank's diary provides a powerful commentary on human courage and frailty, through the vivid experiences of a spirited young woman whose time in the world was tragically cut short.

=> Listen to the Diary of Anne Frank: get the free audiobook here. 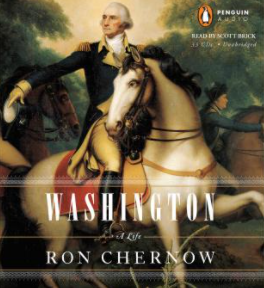 Washington: A Life is the landmark biography of George Washington, the first president of the United States of America.

In this well-researched and crisply paced narrative, author Ron Chernow carries the reader through Washington's troubled boyhood, his precocious feats in the French and Indian War, his creation of Mount Vernon, and many other key events in his life.

Chernow dashes the stereotype of Washington as a stolid, unemotional man. Instead, he portrays him as a celebrated horseman, elegant dancer, and tireless hunter, and a passionate man of many fiery opinions and moods.

Probing his private life, this biography audiobook also explores Washington's youthful infatuation with the married Sally Fairfax, his complex behaviour as a slave master, and his influence as a political genius who knew how to inspire people.

=> Listen to Washington - A Life: get the free audiobook here. 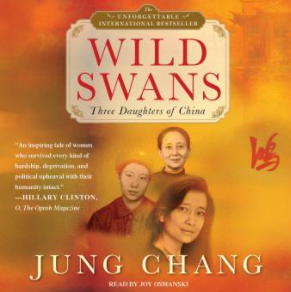 Wild Swans is a family autobiography of three generations in twentieth-century China that blends the intimacy of memoir and the breadth of eyewitness history.

In this engrossing record of Mao’s impact on China, author Jung Chang opens up an unusual window on the female experience in the modern world.

We gain insights into the life of her grandmother, a warlord’s concubine; her mother’s struggles as a young idealistic Communist; and her parents’ experience as members of the Communist elite and their ordeal during the Cultural Revolution.

As the story of each generation unfolds, Chang exposes listeners to the cycles of struggle and drama experienced by her family and millions of others caught in the whirlwind of history.

=> Listen to the Wild Swans memoir: get the free audiobook here. 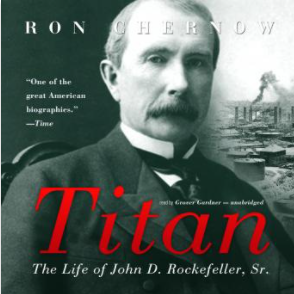 Titan uncovers the life of John D. Rockefeller, Sr., history's first billionaire and the patriarch of America's most famous dynasty.

In this biography audiobook, author Ron Chernow gives us a detailed and insightful history of a man whose true nature has eluded three generations of historians.

Born the son of a flamboyant snake-oil salesman and a strict mother, Rockefeller became the world's richest man by creating America's most powerful and feared monopoly, Standard Oil - a company that refined and marketed nearly 90% of the oil produced in America.

Rockefeller is known as one of the most controversial businessmen in our history. Critics charged that his empire was built on unscrupulous tactics: grand-scale collusion with the railroads, predatory pricing, industrial espionage, and wholesale bribery of political officials.

Yet, this account, which is based on unrestricted access to Rockefeller's exceptionally rich trove of papers - goes beyond the stereotype of Rockfeller as a cold-blooded monster.

Rather, it presents a nuanced portrait of a fascinating, complex man, disclosing numerous family scandals, tragedies, and misfortunes that have never before come to light.

=> Listen to Titan: get the free audiobook here. 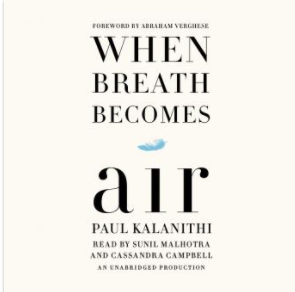 When Breath Becomes Air is the gripping story of an idealistic young neurosurgeon who attempts to answer the question: What makes a life worth living?

At age 36, on the verge of completing a decade’s worth of training as a neurosurgeon, Paul Kalanithi was diagnosed with stage IV lung cancer.

One day he was a doctor treating the dying, and the next he was a patient struggling to live. And just like that, the future he and his wife had imagined evaporated.

This memoir audiobook chronicles Kalanithi’s transformation from a naïve medical student on a quest for the meaning of life, into a neurosurgeon at Stanford, and finally into a patient and new father confronting his own mortality.

=> Listen to When Breath Becomes Air: get the free audiobook here.

9. The Snowball: Warren Buffett and the Business of Life 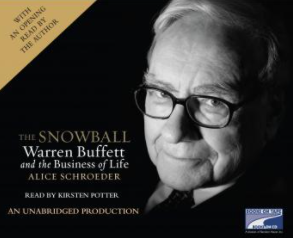 The Snowball is a biography audiobook that recounts the life and times of one of the most respected men in the world, Warren Buffett.

The legendary Omaha investor has never written a memoir, yet he allowed one writer, Alice Schroeder, unprecedented access to explore his personal and business life.

In this biography, we find her observations - the result of countless hours spent asking him questions, talking with his family, friends and business associates, opening his files, and recalling his childhood.

While much has been written on the subject of Warren Buffet's investing style, this book is unique in that it explores his larger philosophy, which is bound up in a complex personality and the details of his life.

=> Listen to The Snowball: get the free audiobook here.

10. I Know Why the Caged Bird Sings 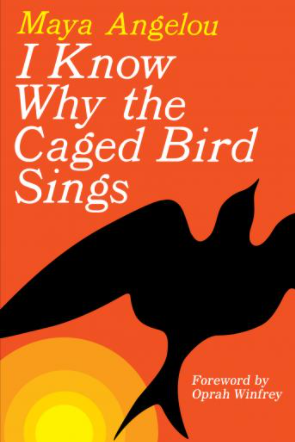 This autobiography audiobook is the debut memoir of American poet and civil rights activist, Maya Angelou.

Here we find a narrative that is all at once joyous and painful, mysterious and memorable - a story that has touched the hearts of listeners worldwide.

Abandoned by their parents, Maya and her older brother Bailey are sent to live with their grandmother and uncle in the small Southern town of Stamps in Arkansas.

There they endure the prejudice of the local community and suffer several racist incidents. Moreover, at eight years old, Maya is attacked by a man many times her age - and has to live with the consequences for a lifetime.

After struggling with guilt and shame for many years, Maya meets a warmhearted mentor who helps her discover that love for herself, the kindness of others, and the ideas of great authors will allow her to set herself free, at last.

=> Listen to I Know Why the Caged Bird Sings: get the free audiobook.

I hope you enjoyed exploring this list of the best biography audiobooks as much as I enjoyed compiling it.

As you can see, there is so much variety in regards to the kinds of experiences we can tune into and benefit from as part of our personal development journey.

You can listen to the experiences of inventors, artists, businesspeople, and discover useful insights that you can apply in your own creative and entrepreneurial ventures.

On the other hand, you can listen to memoir audiobooks that share the poignant experiences of individuals who have conquered major challenges in their life and charted out their own path to success.

There's always something to learn, even when it comes to avoiding the mistakes that others have made.

Which life story will you tap into first?

=> Get a free biography audiobook of your choice here.