Let's look at main ideas from the book, "The Wounded Storyteller" by Arthur Frank. This book examines the concept of human illness, our experiences as sick people, and the way we interact with the world around us. 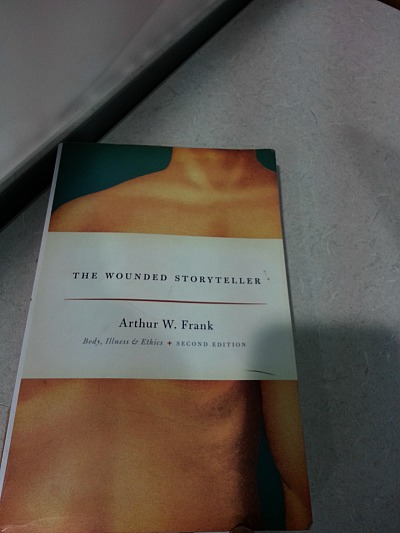 Arthur Frank was moved to write the Wounded Storyteller as a result of his own experiences with disease. For him, writing the book was part of the process of self-healing. He found sharing the illness experiences of others as a way to connect with those who might understand his own suffering.

Taking Your Health into Your Own Hands

Frank believes that the modern experience of illness is overwhelming to the patient, too formal and prevents the patient from really knowing what is going on as they are not allowed nor able to read the medical charts on which their illness is documented. The patient then goes on to tell others about their illness in the same way the physician interpreted it.

Post-colonialism is the idea of people breaking free from medical colonization and having the ability to speak for themselves and have their own voice in regards to their illness.

Frank also talks about a "remission society" made up of people who are "well but could never be considered cured" because their illness still affects their everyday lives in some way. Examples of those in the remission society involve those who have had cancer, the disabled, the chronically ill and those whose allergies and environmental sensitivities require dietary and other self-monitoring.

According to Frank, those in the remission society constantly shift between sickness and wellness. Their life is never the same after their illness. Susan Sontag created a metaphor of illness, saying that there are two kingdoms: the kingdom of the well and the kingdom of the sick. For a person in the remission society, it is like they are on permanent visa status as they are caught between the two kingdoms.

The problem of control.

An ill body can experience contingency, which is the opposite of having control over oneself.

Loss of control can be stigmatizing. It can also be very embarrassing, both for the person who experiences contingency and for spectators. Often, the ill person may try to avoid this by not being in situations where he might embarrass himself. The illness person may also try to protect others from witnessing such displays of contingency.

Body-relatedness refers to a person's answer to the question, "Do I have a body or am I a body?". People can be dissociated or associated to their bodies.

Patients who are dissociated see their body as an "it". Such a patient ignores their body's needs and does not eat well or exercise.

On the other hand, patients who are associated see themselves as 'being' a body rather than just having one. Such patients take care of their body.

Other-relatedness is about a persons's relationship to other people, in terms of being a body.

A dyadic body has a sense of brotherhood and feels a connection to other bodies. The dyadic body sees suffering as shared and receives assurance through storytelling and knowing that other bodies can recognise what it feels.

A monadic body sees itself as separate and alone. Frank argues that medicine encourages monadic bodies as hospitals create distance and prevent contact between patients and the world around them.

The fourth body problem is desire. Desire is the problem of always wanting more. Ill bodies can to come to lack desire and as a result, they may not take extra care to show love to themselves.

A body lacking desire would not likely be interested in buying new shoes, or wearing makeup. Such a body might "fall out of love with itself" and result in the diminished self. The diminished self is when a body ceases to consider itself desirable.

Some bodies remain productive of desire. For instance, a dyadic body will still love itself and feel the desire to serve others.

The discipline body takes action to self-regiment. It tries to assert predictability through therapeutic regimens like medical treatments. The disciplined body is disassociated and monadic, its only goal is to get well.

The final key aspect we will consider are three types of narratives Arthur Frank identifies: the restitution narrative, the chaos narrative and the quest narrative.

Memoir - The memoir is the gentlest style of quest narrative. It combines telling the illness story with telling other events in the writer's life. No special insight is claimed at the end.

Manifesto - The least gentle quest narratives are manifestos. Manifesto narratives carry demands for social action. They often involve a situation where society is suppressing a truth about illness and the narrative seeks to let that truth be told. Manifestos are prophetic and political.

That is a summary of the key points from "The Wounded Storyteller" by Arthur Frank. It was an interesting book to study, and it brought out several fascinating concepts. What points did you find most interesting? Do you agree with Arthur Frank? Feel free to comment below.

What does it mean to be a Villain?