10 Best Strategy Board Games That Will Make You Smarter

Looking for a fun challenge? Here are 10 of the best strategy board games that will make you smarter as you play them. 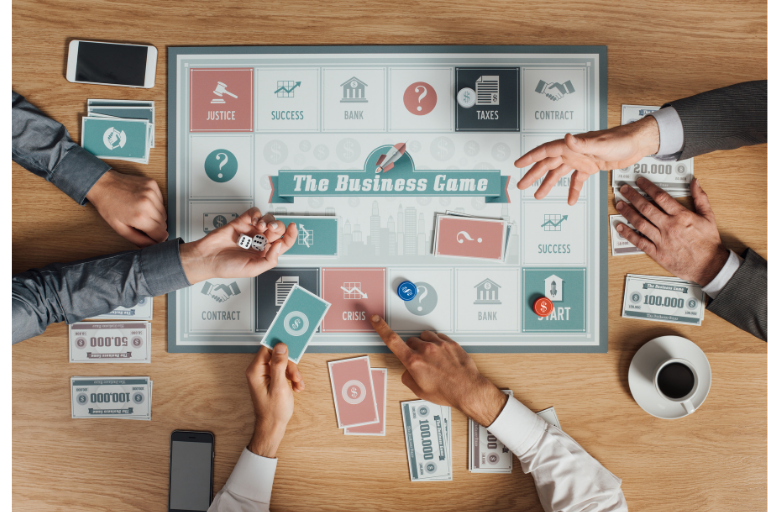 When it comes to games that offer an exciting challenge and an opportunity for personal development, strategic board games make it to the top of the list.

Sure there are many other games that you can play to relax and unwind, such as conversation games.

But sometimes, it's good to leave your comfort zone and immerse yourself in new experiences that stretch your mental capacities.

Let's consider the best strategy board games that can help you do exactly that.

What are Strategy Board Games? 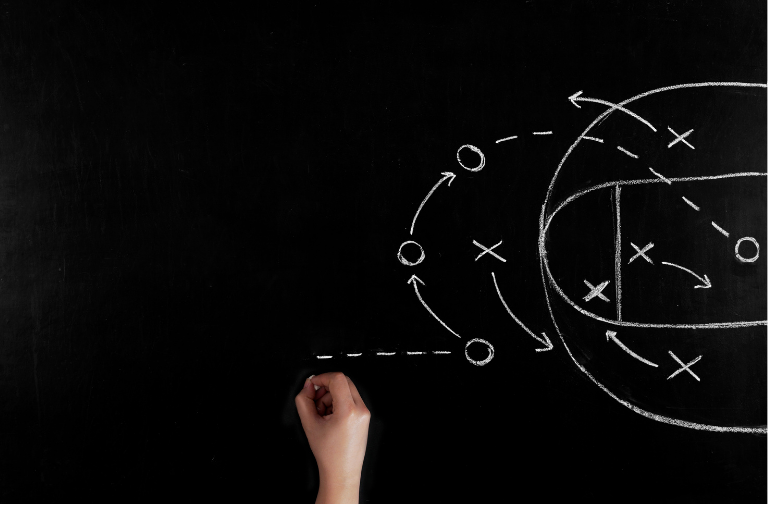 Strategy board games are board games that test your critical thinking and decision-making skills.

When you play a strategy board game, you have to assess all the possible options and consequences, in order to work towards the most desired outcome.

You also have to have high situational awareness, so you can anticipate the moves that others players might make.

Unlike other games where you might win by chance, you can only win a strategy game by implementing a thoughtful and deliberate plan of action.

These kinds of games are popular because they provide greater room for participants to demonstrate their individual creativity and intelligence.

What are the Best Strategy Board Games?

Here are the best strategy board games to play with friends and family: 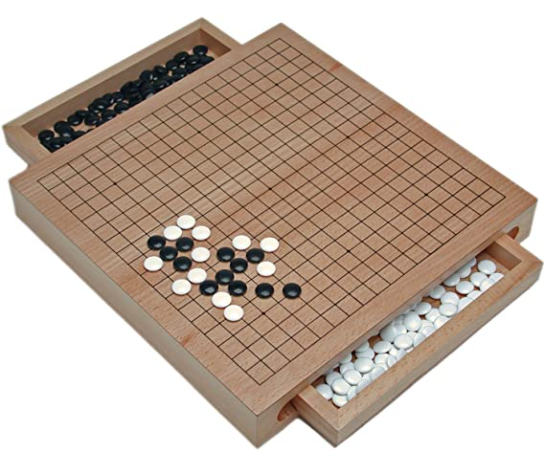 The "GO" Board Game: Find on Amazon

If you were to take a quick glance at the Go board game and it's equipment, it might look quite simple...but don't be fooled.

Go has been described as the most complicated board game in existence. It's a game with so many possible moves and configurations that it's much harder for even a computer program to play than chess.

The game begins with an empty board. Players take turns to form territories by placing their stones on vacant line intersections on the board.

Go is both challenging and fun because it involves a countless number of intriguing patterns and clever maneuvers. Yet, the actual rules of the game are simple to understand, so it's great for beginners to try their hand at. 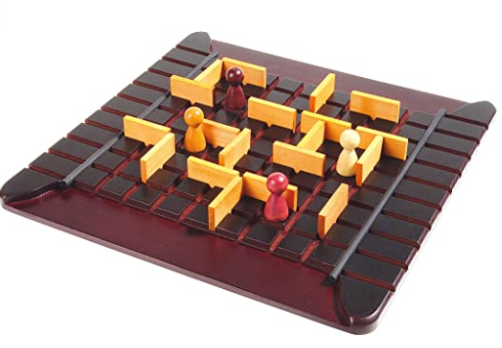 Quoridor Board Game: Find on Amazon

Quoridor is an abstract strategy board game that is similar to chess in the sense that players move pawn-shaped pieces across the board and the aim is to reach your opponent's side of the board.

However, there's a twist - the game involves wooden walls that you can place down to block the progress of your opponent or force them down a different route.

On each turn, you have two options: move your pawn or place down a wall. Keep in mind that you aren't allowed to jump over another pawn or completely block someone in on all sides.

Logistical and analytical thinking skills are definitely required as you try to figure out a way to successfully navigate the maze your opponent creates for you!

=> Get the "Quoridor" board game on Amazon. 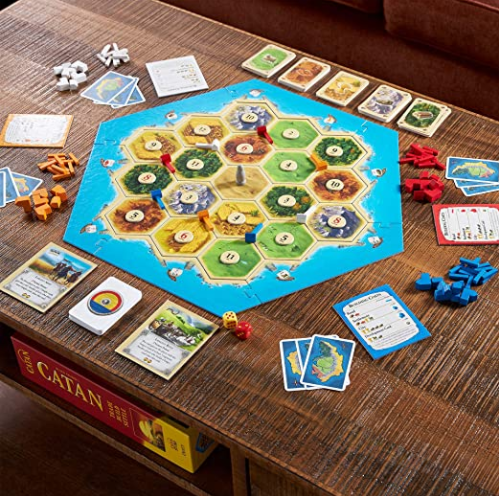 Catan Board Game: Find on Amazon

Catan, also known as Settlers of Catan, is a board game where players acquire, trade and combine resources to build roads, settlements and cities.

The goal is to devise a strategy that allows you to expand cleverly, so you can be the first player to reach 10 victory points and win the game.

The game board, which represents the island, is composed of hexagonal tiles that represent various regions, such as pastures, fields, mountains, hills, forests, and desert. These tiles are randomly mixed to create a new game environment every time you play.

Catan involves a lot of unique features and interesting mechanics that keep you engaged. Moreover, negotiation plays a big role in this game, since you have to trade to acquire the resources you need to gain victory points.

Overall, Catan is a well-established, family-friendly strategy game that encourages players to experiment and explore the many different routes to victory.

=> Get the "Catan" board game on Amazon. 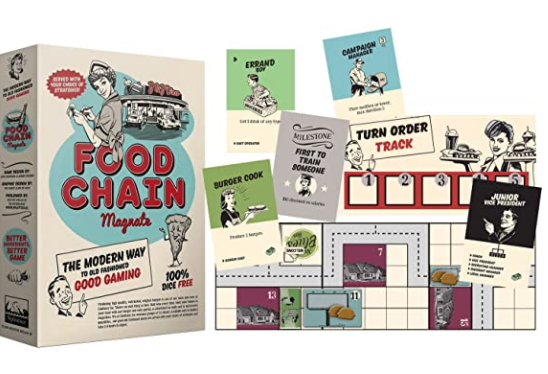 Ever wondered what it would be like to build a fast food chain? Well, it's time to put your entrepreneurial hat on, because that's what this board game is all about.

In Food Chain Magnate, the focus is on building your company using a card-driven human resource management system.

Each player starts off as a single entrepreneur and gradually builds up their company by hiring and training staff - represented by cards - and by running the usual business operations such as purchasing, marketing and sales.

The game continues until the bank runs out of money (twice), and the richest player wins at the end.

Food Chain Magnate is a little more expensive than the other strategy board games on this list - because it's created and distributed by a small company.

However, it's an enjoyable game that simulates the kind of complex decisions and trade-offs that business owners have to deal with in the real world.

=> Get the "Food Chain Magnate" board game on Amazon. 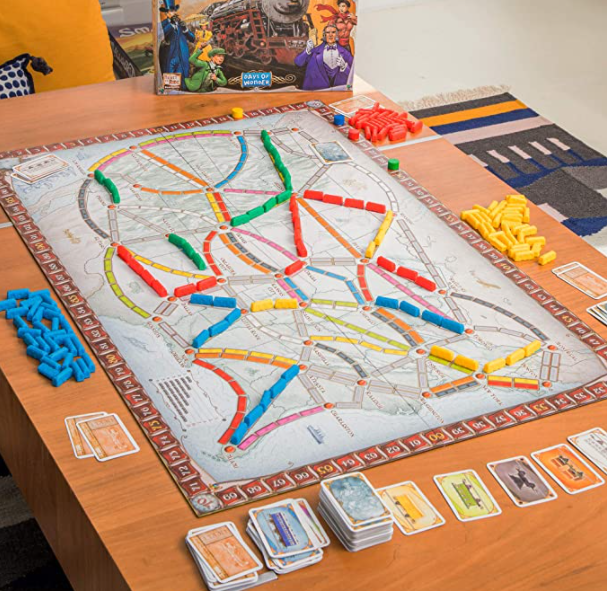 Ticket to Ride Board Game: Find on Amazon

Ticket to Ride is an adventurous board game where players compete to connect iconic cities across the United States by claiming railway routes on the map board.

To build these railway routes, you have to collect and play matching train cards. The longer the route, the more points you earn.

You can also earn bonus points at the end if you fulfill Destination Tickets (goal cards that connect distant cities), or if you finish the game with the longest continuous path on the map board!

=> Get the "Ticket to Ride" board game on Amazon. 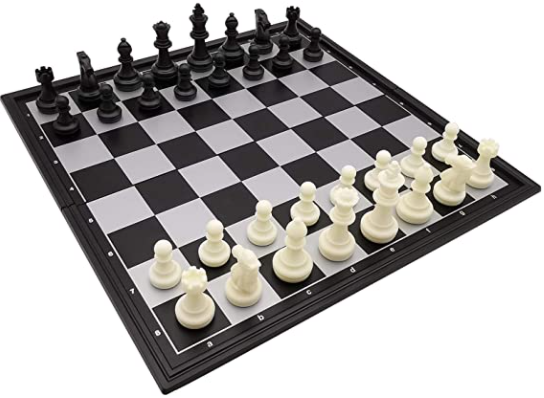 We've alluded to it a couple of times already, but we can't obviously compile this list without including one of the most classic and iconic strategy board games of all time: Chess.

A chessboard is made up of eight rows and eight columns of squares with alternating colours.

In order to play successfully, you need to know how to move each of the six chess pieces: The king, the queen, the rooks, the bishops, the knights, and the pawns.

You also need to formulate your strategy for the game - the way you will move in order to capture your opponent's pieces, defend your own pieces, or control important squares in the game.

A good chess strategy involves development - moving each piece one by one to its most advantageous position on the board. Many players make the mistake of only moving a few pieces around, until these get stuck or captured, and reinforcements are required.

However, to have the best chance of winning in chess, you need all your pieces in play and ready for battle.

Moreover, you need to think quickly and anticipate what's coming next - you can't afford to waste a single move in this game of strategy.

=> Get this black and white chess set on Amazon. 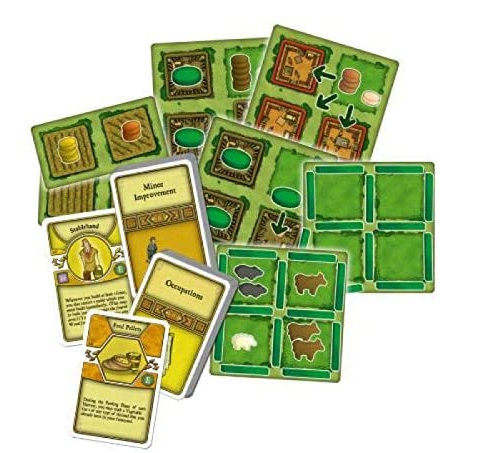 Agricola is the Latin word for farmer, and in this game, you're a farmer in a wooden shack with your spouse, and little else.

This game is somewhat similar to Catan, in that it focuses on your resource management and prioritization skills.

On a turn, you get to take only two actions, one for you and one for the spouse, from all the possibilities you'll find on a farm: collecting clay, wood or stone; building fences; and so on.

You might think about having kids in order to get more work accomplished, but first you'll need to expand your house and make sure that you have the means to feed them.

In Agricola, there are 14 game turns plus 6 harvest phases. Each player also starts with a hand of 7 Occupation cards and 7 Minor Improvement cards that players use for their strategy.

This results in a game that can go in various different directions. Sometimes it's a good choice to stay on course, sometimes you better react to what your opponents do...

=> Get the "Agricola" board game on Amazon. 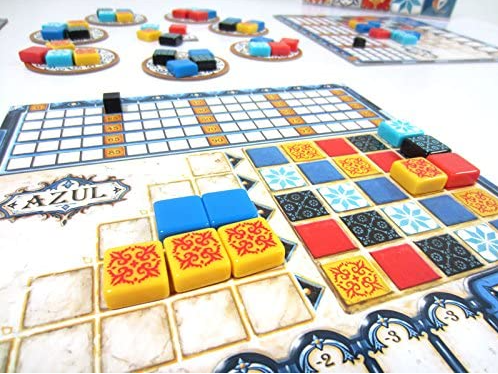 Azul Board Game: Find on Amazon

Azul is a board game where players take turns claiming coloured tiles and arranging them on their board to score points based on how they’ve placed them.

Extra points are scored for collecting sets of the same colour of tile, or for creating particular patterns, while there are penalties for taking tiles that you're unable to use.

However, every tile that you claim affects what your opponents can take next, so think multiple steps ahead as you play this game!

Azul was inspired by the stunning "azulejos" - originally white and blue ceramic tiles - that Portguese King Manuel I discovered on a visit to the Alhambra Palace in Southern Spain.

This strategic board game teaches you to be a real artisan, maximizing the beauty of your work (and your score!) while ensuring that there are no wasted supplies in the process. 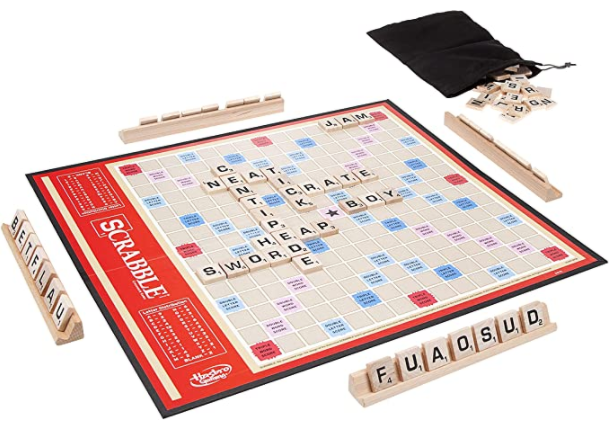 Scrabble Board Game: Find on Amazon

Scrabble is another classic board game that will make you smarter.

In this game, you pick 7 letter tiles at random from the drawstring bag and line them up in your tray. Then, you have to form a word on the board with the letters you have available.

After playing your turn, count the value of all the letters in every new word that you formed. Don't forget the bonus points for placing letters on premium squares (e.g. double letter, triple word).

The secret of getting ahead in this game lies in playing as many words as possible on the high-scoring hotspots. Also, see if you can use all 7 tiles in one turn, which adds a whopping 50 points to your score.

The great thing about this game is that the more you play, the more unusual words you discover, and the more your vocabulary improves!

=> Get the "Scrabble" board game on Amazon. 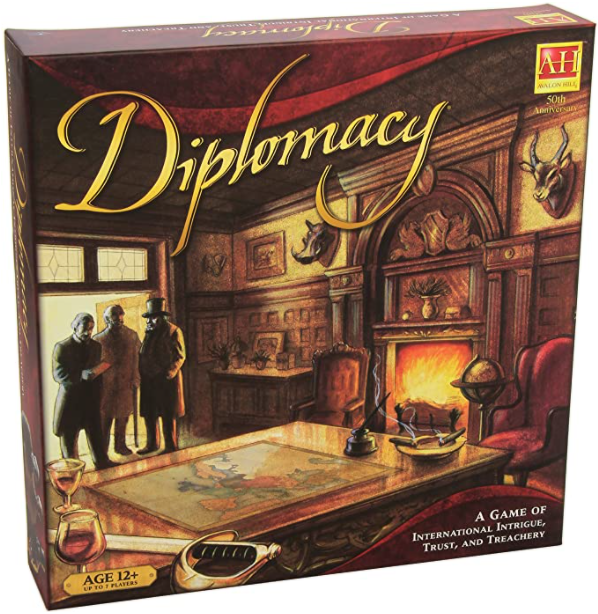 Diplomacy Board Game: Find on Amazon

Diplomacy is a strategy game where individuals take on the role of one of the seven "Great Powers of Europe": Great Britain, France, Austria-Hungary, Germany, Italy, Russia or Turkey, in the years prior to WWI.

This game does not use dice - rather it relies on your ability to think cleverly, devise a strategic plan, and form beneficial alliances.

Following each round of negotiations, each player secretly writes an order for each of his or her military units on a slip of paper. Afterwards, the orders are simultaneously revealed and implemented. Some units are moved, some have to retreat, and some are removed.

The aim of the game is to gain control of special provinces on the game board that are referred to as "supply centers".

As soon as one Great Power controls 18 supply centers, it’s considered to have gained control of Europe. Alternatively, the game can be ended by mutual consent, resulting in a tie.

Knowing whom to trust, when to trust them, what to promise, and when to promise it is the heart of this unique board game.

=> Get the "Diplomacy" board game on Amazon.

Thanks for checking out his post on the best strategy board games to include in your next game night.

Have you played any of these games before? Which ones are you planning to try out?

Also, did you know that strategy games are used in cognitive training? Yes, that's right - because these games actively engage players, they can improve your memory, increase your information processing speed, and enhance your social skills. They really do make you smarter!

All in all, these games provide a delicate dose of competition and moderate mental stimulation - which can be refreshing after a long day of monotonous work.

They also provide an opportunity for you to create fun memories with your loved ones, which is the icing on the cake!