The Success Iceberg - Uncovering What Success Really Looks Like

The success iceberg is one of my favourite personal growth/business concepts. It's a great way of picturing the reality behind what looks like easy success. 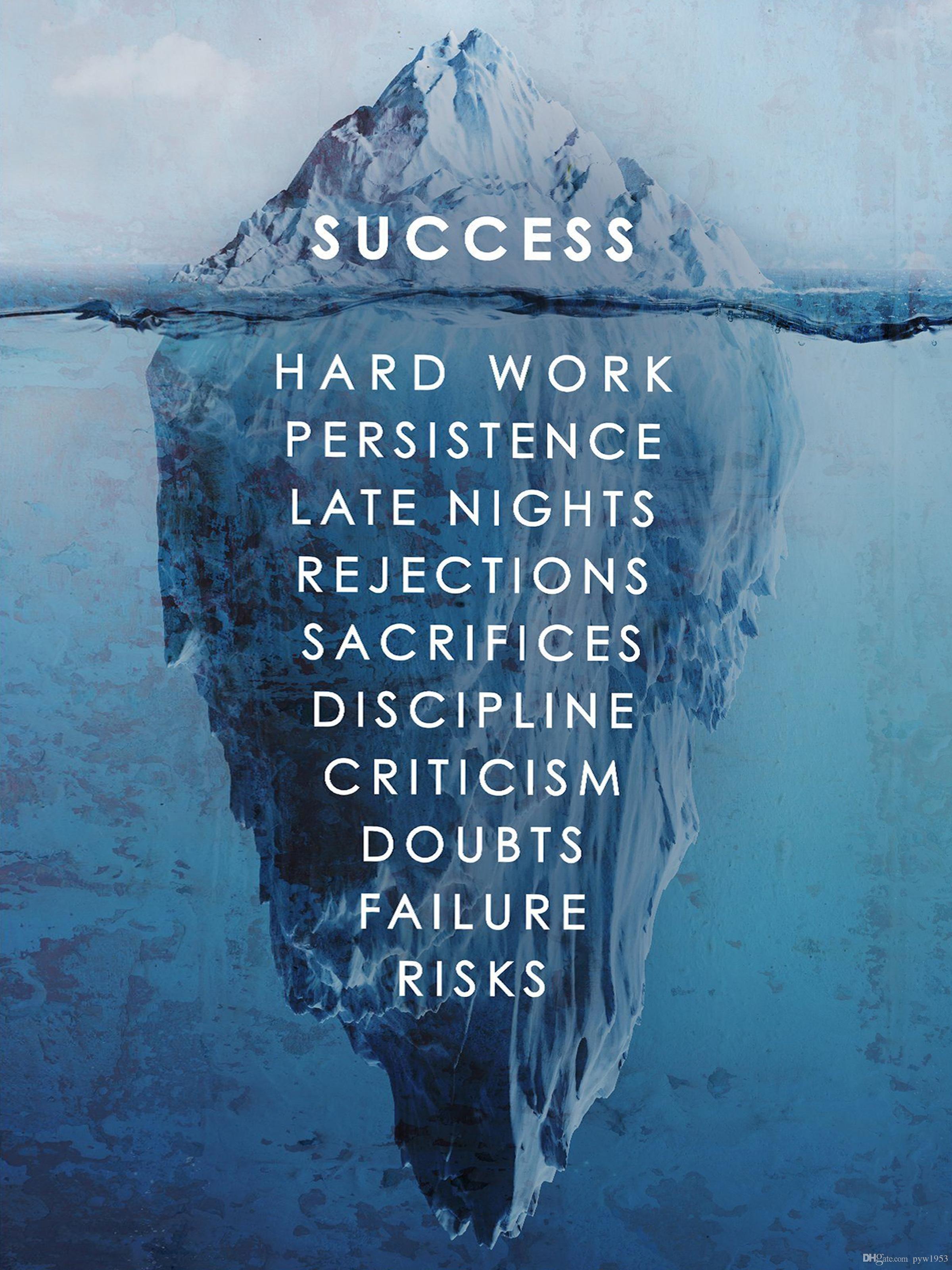 I stumbled upon the success iceberg a couple of years ago on Instagram. We call it that because it demonstrates the iceberg-like nature of success: everyone sees just a fraction of what really goes down.

Every sees the amazing results, but no one sees the mountain of hard work and effort that happened behind closed doors, the stuff that laid the foundation for success.

Of course, the success iceberg is relatable for successful entrepreneurs who have experienced massive growth with their business and projects.

They've experienced the truth of the iceberg picture. But the success iceberg is not just for them. I believe it's something that anyone can take a look at and be inspired, motivated by.

The success iceberg can also be appreciated by those who feel like they are just 'under the water' so to speak, those who don't feel like they've achieved much success yet, but they know that they've been going through everything else. The success iceberg reminds such ones that success will build soon, and they should never feel alone in the grind.

Since the success iceberg really is so fascinating, I thought we should spend some time looking at each layer of the iceberg as pictured above. This will help us get a heightened appreciation of how much work goes on behind the scenes whenever we see a successful person.

People see success, but very often they forget about the hard work that an individual must have put in to get there.

I think it's quite fitting that hard work is placed near the top of the success iceberg, because although people don't see it, a lot of people are familiar with the idea that to be successful you must work hard.

Hard work is what creates success because success is achieved through repeated action and effort, even when you don't feel up for it.

Persistence is another essential part of success that a lot of people don't see. When you see success, you see the end result. But you don't see how many times that person had to keep trying. You don't see the willpower they needed to keep going, even when things didn't look hopeful. Persistence is a beautiful quality, and without it, many of the successes we are familar with would not exist.

90% of an iceberg is below the water. When you're in your apartment working late, forgoing sleep to work on something that's important to you - that's the 90% of the success equation that no one sees. They see when you turn up in the day time looking like you've got everything together.

For all they know, you go to bed at the same time as them. Yet, for most successful people, late nights are a brutal reality and habit that they've had to develop. Success happens for those who go above and beyond what others are doing, and those late nights are where the magic happens.

Succesful people get rejected all the time. But you never hear about that. Success-minded entrepreneurs are constantly on a mission to create as many opportunities as possible for their business.

This means that they constantly need to brave the ask, and pitch their idea to people who can help them get closer to their goals. But the truth is that rejection happens a lot more than acceptance.

You will get rejected many, many times before you get that occasional yes. The key to getting through rejections is something we talked about ealier, perservance.

Successful people constantly need to make sacrifices. It's an inherent part of their daily operation. Whether it's sleep or time with friends and family, there's always something that will suffer to some degree. You've probably heard the saying that 'Success depends on how much you are willing to sacrifice'.

Why is that true? Because first of all, most people like to stay within their comfort zone. By sacrificing a life of ease and pleasure, you automatically start to set yourself apart.

That saying is also true because after your initial success, you will need to continue recalibrating and figuring out what the next steps are. Have you reached your target, or would you want to sacrifice more? This is a very serious aspect of success and something that should be considered.

Sacrifice is important, but it's also important to draw limits and fully decide what you will never sacrifice.

Success is faciliated by good habits. And good habits are built by discipline. Discipline is what makes you keep going when you don't feel like it.

Discipline is also what makes you stay focused, and direct your efforts in one direction so that you can be productive.

People see success, but they often don't see this side of the iceberg, including all the restrictions a successful person has had to put on themselves. But it's always there. Successful people have learned to discipline themselves, and this enables them to experience even more success as time goes on.

When you look at a successful person, you might find it hard to believe that anyone has ever told them that their idea was bad. But trust me, they've heard it all. Criticism is something you just can't get around, so long as you've invested your time and energy into something.

People will always have something to say, especially people who are jealous and slightly mad that you're doing something they can't do themselves. Successful people learn from criticism, both in terms of ways they can realistically improve and also from what it tells them about the human pysche.

Every successful person has had to battle with serious doubts. 'Will this work?' 'Am I wasting my time?' Building a business can be quite a lonely journey at the beginning. With the lack of validation and perhaps support, it is common for any hardworking person to worry about whether their idea will be accepted.

But the difference between those who achieve success and those who don't is that successful people feel the fear and do it anyway. They don't allow their doubts to cripple them from taking action.

Failure is one of the biggest components of the success iceberg. But no-one sees it! People don't tend to brag about their failures, but that doesn't mean that they've never failed. On the contrary, for successful people, failure is one the most relatable situations in life.

If you've never failed at anything, it means you've never tried something new. Successful people, those who create opportunities for themselves, know failure like the back of their hand. Failure is a regular occurence, but they get back up, and each failure eventually leads them to the success that everyone praises.

Successful people value risk-taking. And many times we forget how much of a risk many now-successful people took. To pour hours of your time and energy into something that could possibly flop is to take a huge risk. Risk scares many people away, but those who are successful see risk in a different way.

Risk is attractive, because without risk there is no reward. Nothing in this world is ever guaranteed, but you can't take that as an excuse to do nothing. Taking risks is the only way to see the tip of the iceberg - success.

To see the success iceberg as a whole though, is to see the most majestic view.

Success is an Iceberg Poster Canvas

The success iceberg is something that can and should motivate you everyday. Here's a good way to keep it at the forefront of your mind - hang it up in your office or living room, and never feel bad because you've not yet achieved the success you desire.

Keep going and continue to apply each of the lower levels of success till you reach the tip. You can get your own success iceberg canvas on amazon. 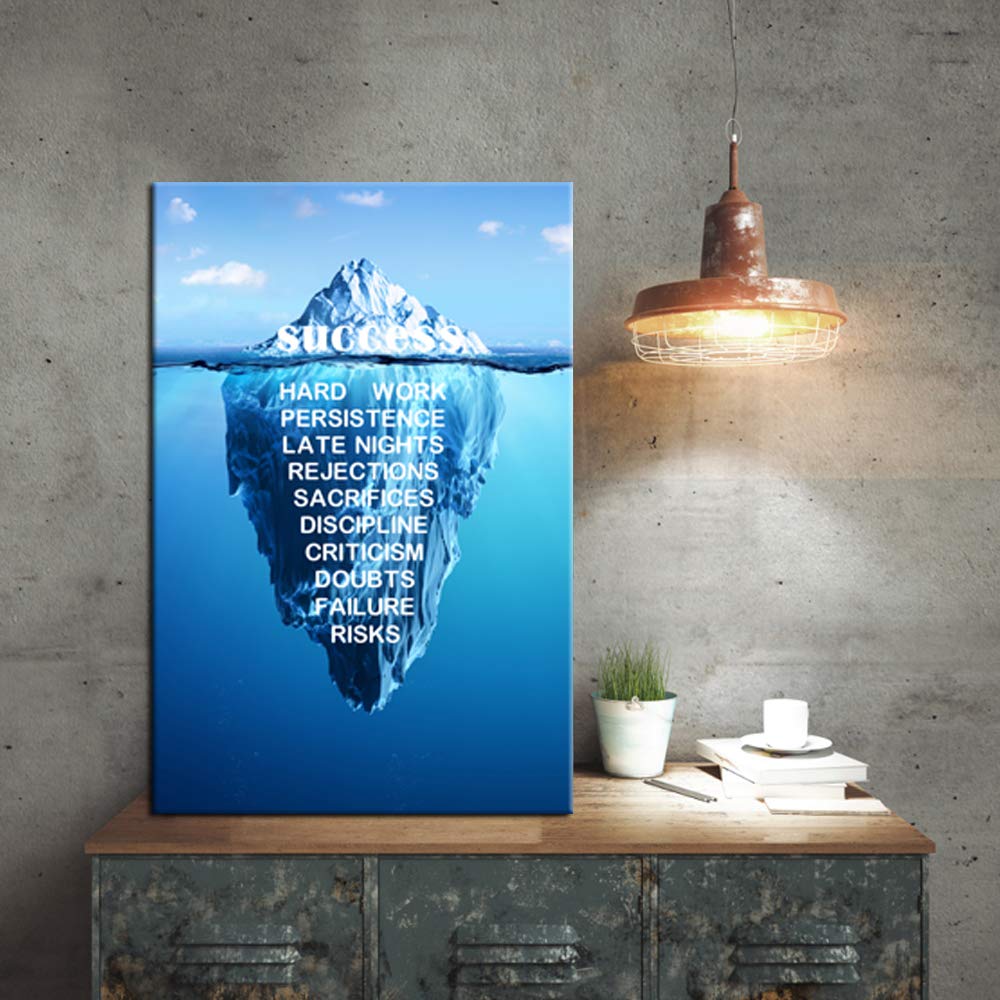 Success is an Iceberg Poster on Amazon

Thanks for reading! How have you benefited from reflecting on the success iceberg?